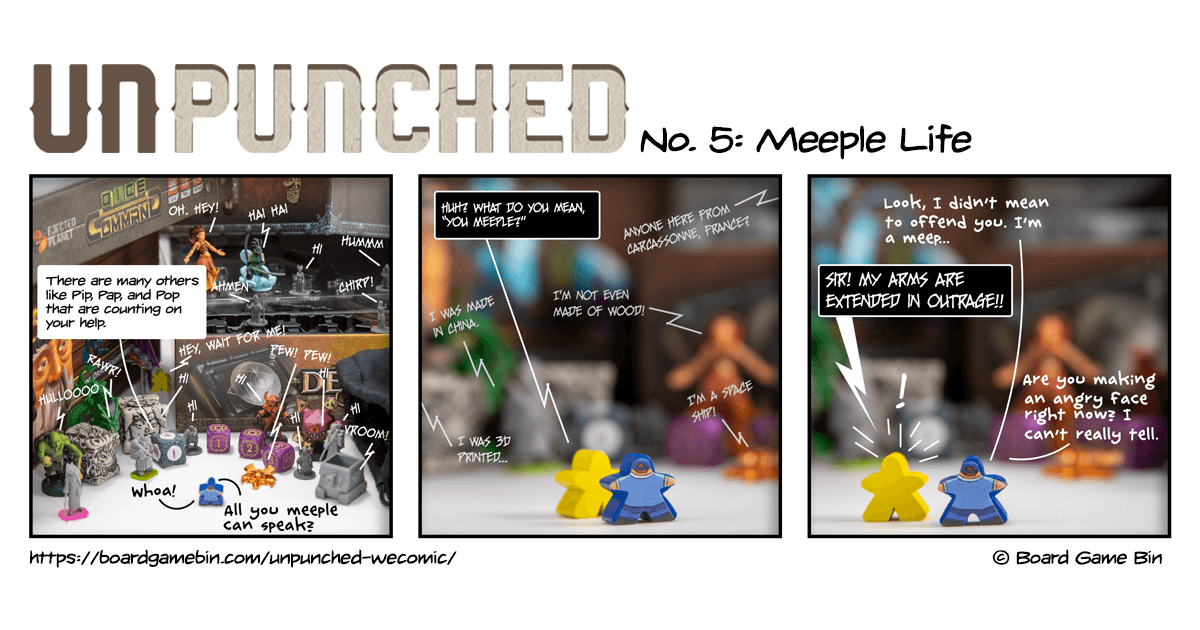 Many board games come with different types of components. Lots of modern board games boast some of the most detailed and realistic plastic miniature figures. In these games, the bonus is that aside from the experience of the board game itself, hobbyists can now show off their artistic talents for everyone to enjoy once they are painted. However, some of the most popular games include simplistic little wooden characters called Meeples.

So, what is a meeple and where did it come from? The word Meeple by a few accounts seem to come from the combined words of 'My' and 'People'. As far as we can tell, these little wooden figurines known as Meeples, first officially appeared in the board game, Carcassonne by Klaus-Jürgen Wrede. Although the first people shaped objects seems to have an origin as far back as 400AD in Hnefatafl – Ancient Viking Chess.

Either way, whether you love the realism of highly detailed or posable figures in your games, or if you care to use your imagination a little more than visual effects, there's a hobby in games for everyone! We chose to skip playing the games altogether and just make comics out of them. No. Not really.

Games in This Comic

Quodd Heroes is very special game published by Wonderment Games that comes from the mind of Ryan Iler. In this game, players will take on the role of these unique cubed shaped characters as they quest through Nintendo game like scenarios. There's plenty of game to be had with many characters and many scenarios to play through!

Die in the Dungeon

Published by Canadian Local FunDaMental Games by Wes Woodbury Die in the Dungeon is a unique dice and dungeon crawling board game for 1 to 2 players where players get to fight their way out of a dungeon as a monster!

Mount Fuji is on the verge of erupting. Red hot lava will soon consume the three secret Seien-ji (聖煙寺), sacred temples hidden deep in the bowels of the volcano. The Shōgun is determined to preserve the precious heritage and sends his most noble and gifted samurai warriors on a quest inside the volcano to retrieve the valuable goods. An incredible game of strategy, gear crafting, fun and adventure that is beautifully presented in this deluxe version that was Kickstarted in 2020.

All 6 heroes from the Dice Throne Season One and Season 2 board game series come to life pre-painted from the factory, ready straight from the box to represent your heroes as you traverse the Crimson Sands. They also come in unpainted versions for those enthusaists and hobbyists who want to put their own spin on these characters!

Moonrakers is a deck-building game that mixes temporary alliances, negotiation, and ship-building with traditional deck management for a unique and competitive gameplay experience.

Start From the Beginning

Feel like you're starting part way through and not really sure what's going on? Start reading the comic from the beginning!